Chef Aimee Novak will be one of the featured chefs at our Farm to Table Dinner on August 27, 2017. PFM Market Manager Kelley Villa sat down with her to chat about why she loves local food. 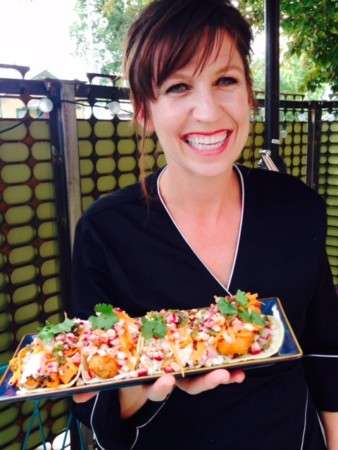 Prescott Farmers Market: How long have you been in the Prescott area?

Aimee Novak: I’ve been here since 1994. I was living in Flagstaff, but it was too cold for me! Most of my family moved from Flagstaff to Prescott after I did.

PFM: What’s your role in our local food system?

AN: My first role here was owning Soldi Creative Cuisine. First and foremost, I was committed to being a seasonal restaurant, which meant using as much local produce as I could get my hands on. As a chef, when you cook with fruits and vegetables that are at their peak, in season, you have to do very little to get them to taste great.

Economically speaking, if I’m running a restaurant…when I buy local, I’m also buying things when there’s a surplus and the prices are better. To do that, I have to have relationships with local farmers. I would get calls about 30 pounds of purple-topped turnips for a screamin’ deal. Of course I’ll make turnip tacos!

I remember once, Cory (of Whipstone Farm) called me with a ton of baby leeks and told me that it was the only week they’d be available. I made a leek dish for our Friday night service using a gentle sauté. It was delicious, and I got a great deal because he had to cut off all the tops anyway.

This ties into the reason why I changed my menu at Soldi every week. There were frequently spur of the moment changes to the menu because I bought local. But we always had tacos, salad, and my international sandwiches.

My new job is with the University of Arizona Cooperative Extension. I’m the food safety program coordinator. The best part about my job is that I’m able to use all the life skills that I’ve ever acquired in this position. It seems like my whole life has come together, skills-wise, to drop me here. For example, I used to be in adult education for Redken. My culinary background ties in with food safety.

In my restaurant, food safety was high on my list – almost annoyingly so. My job helps me set the bar high in our local restaurants for food safety. I teach the manager-level food safety certificate.

I also get to develop community-based food programs. The sky is the limit for us, hence the Spring Culinary Series that we recently developed and launched. There was a whole class devoted to seasonality and menu planning, where we discussed local ingredients and the farmers market. We took beets, like how they come from the market, greens and all. We discussed it from root to tip, and featured beets in pesto and borscht. People loved it!

AN: It’s important because you’re preserving green space. If you support the farms, then that particular space can’t be developed. When you make a conscious decision to show up at the market, you’re supporting a small local business AND preserving green space. Sustainability is key to me. Supporting local farmers also means that the food travels less. It’s fresher and tastes better.

Being part of the farmers market community is really important. It makes you feel like you’re more engrained in the city you live in – like you’re part of something bigger. Plus, just knowing where my food comes from is important to me. Without getting too “cheffy,” there’s something to be said about terroir. For example, you can be sitting outside at a restaurant in Tuscany, drinking wine and eating bruschetta. You’re sitting in the environment where it’s grown…and it’s infinitely better. It’s going to taste so much better when you eat it there rather than importing it here. You might try to make that same dish here, drink the same wine from the same region in Tuscany and you will never have the same “taste” experience back home. I can’t explain the science behind it…but as a chef, it’s BETTER. If everyone could understand that, they would know why local agriculture is important.

Terroir refers to the area where a food is grown. It’s a term often used to talk about wine, but I think it applies to food too. You smell and breathe it in, and the trees – it lends to the sensation on your palette. No matter what the region you are in, buying produce locally will allow you to experience terroir. When I taste a carrot from Cory and Shanti, I know it’s theirs. And my son knows too.

PFM: What’s it like raising a little one around so many vegetables?

AN: I don’t really get where the vegetable stigma comes from…maybe from school, from lunchtime. To get Leo to eat vegetables, we’ll put something on his plate that he knows – such as cucumber or broccoli. We’ll also put something on there that he doesn’t know, like fennel. He’ll say, “I don’t want to eat that.” Then we’ll say, “Well then, eat your cucumber.” He will choose the “lesser of two evils” – it’s wishful thinking that maybe one day he will make the conscious decision to choose fennel over cucumber. Right now it’s trickery!

PFM: Tell me about your passion for food. Where did it come from, what sustains it?

AN: There is a tasting moment in every chef’s life that turns you from a non-chef to a chef. I went to Europe in 2005. I had a chicken in Paris, and I had spaghetti alle vongole (with clams) in Italy. I can still taste those two things. It’s in my taste memory. When I ate in Europe for the first time, I realized that I wasn’t eating food the way it was meant to be eaten. I was consuming calories; I wasn’t dining on a meal. It made me want to bring that experience to other people, tasting something that blew your mind. We saw that with our Farmer’s Platter at Soldi. We changed the vegetables all the time, and it was amazing to see how many people loved it. They shocked themselves at how much they enjoyed eating an entire plate of vegetables. 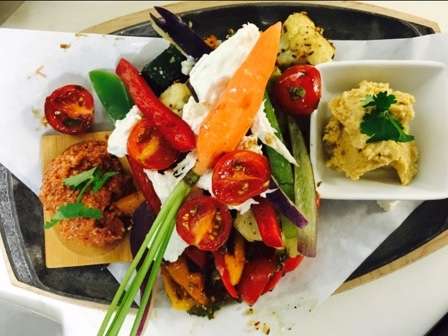 PFM: The Farm to Table Dinner is in less than 3 months! What are you most excited about?

AN: I’m excited about all the chefs showcasing the bounty that we have in this city. I don’t think many people are aware of how much the market has to offer. I’m really excited to show it off to our community members.