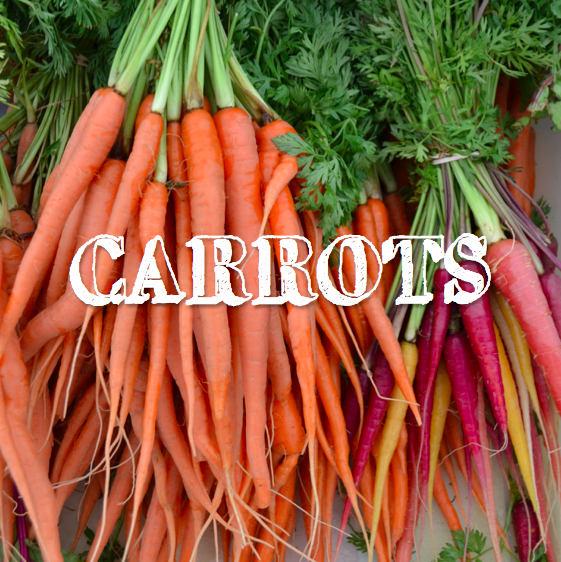 The carrot (Daucus carota) is a familiar root vegetable in the Umbelliferae family that is grown and consumed around the world. The modern day carrot was likely domesticated from wild carrot in Europe and/or Southwest Asia. The history of carrot’s domestication isn’t clear, but it appears that humans have been eating wild and then cultivated carrots for thousands of years. While most people are accustomed to carrots being orange, they come in a variety of colors: white, yellow, red, purple and black. The orange varieties gained in popularity in the 17th century and have stayed popular since.

The carrot plant is a biennial, which means that it requires two growing seasons in order to produce seeds. The family Umbelliferae is named as such because of the umbrella-shaped flowers its plants produce. Other plants in the family have similar flowers and seeds: cumin, fennel, dill, caraway, parsley and parsnips. The plant produces delicate, white, lace-like flowers in the second growing season, which when pollinated form hundreds of tiny seeds. Carrots prefer well-draining soils, high in organic matter and can be grown year-round in Yavapai County, although the sweetest, crunchiest carrots are harvested in the winter months. During the peak of summer’s heat, carrots may taste bitter and have a more woody texture. Fast-growing varieties produce good-sized carrots 3 months from their planting date.

Orange carrots are known for containing high amounts of vitamin A. They are also a good source of biotin, vitamin K and fiber. The greens on top of the carrot root are also edible, however people rarely eat them. Carrots can be eaten raw or cooked in myriad ways. As winter approaches, it’s the ideal time to incorporate carrots into cooking—soups, roasts and curries are a great place to start.